Few artists can give better testimony that Doultons at Lambeth was a good place to work. Winnie Bowstead started work as a senior assistant in 1896 and was still working there, albeit intermittently in 1947.

One of the major projects on which she worked in 1938-1939 was the frieze, designed by Gilbert Bayes, Pottery through the Ages over the entrance to Doulton House on the embankment. The result of working there for so long is that works by Winnie Bowstead are still relatively commonplace. 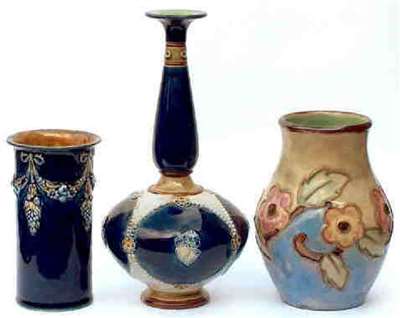 The three vases above are examples from the long period for which Winnie Bowstead worked at Doultons. The vase on the left has the remnants of Victorian design, with swags and bows. The central one retains the beading that was so common in Victorian times, but has the contrasted blocks of colour that became so popular at the beginning if the 20th century. The vase on the right comes clearly from the 1930s.

The central vase is testimony to the ability of Doulton Artists. It is one of a pair with a vase by Christine Abbot, and the two are so similar as to be indistinguishable. Below is Winnie Bowstead's 'WB' signature mark for Doultons.