Louisa Wakely at Doulton, in 1876, when decorative products were a relatively new venture, and by 1882 has risen to be a senior assistant, collaborating at times with the work of Eliza Simmance. The exact date of her leaving Doultons is not known, but it appears to be in the first decade of the 20th century.

Her signature changed with time from an impressed ‘W’ to an incised ‘LW’. As a generalization, it was the more junior artists who impressed and the more senior and experienced artists who incised their initials. 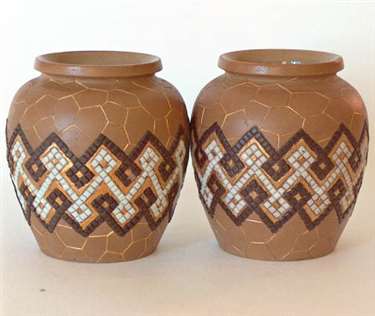 The three illustrations above and below show the variety of her work. The pair of squat Silicon Ware vases above, on which she collaborated with Eliza Simmance were produced before 1891. At that date the addition of the word ‘England’ to the backstamp became mandatory: these vases do not have the word ‘England’. The jug and the pair of vases below, were all produced after 1902, when the ‘Doulton’ backstamp, became a ‘Royal Doulton’ backstamp.

By the time the slender vases and jug were produced, she appears to have attained significant status. These vases have her incised monogram and they also have the impressed mark of Letitia Rosevear, a junior at that time, as her assistant. Notable on the tall vases is the delicacy of the tubelining, a mark of a very fine ceramic artist.