Margaret E. Thompson trained at Goldsmith’s Art Institute and was an artist and designer with a multitude of talents. At Goldsmiths she won a silver Medal for Applied Design in 1897and the following tear won a Gold Medal at the Royal College. Her background was, as a result, one of an artist rather than a commercial designer. She joined Doulton at some time before the issuing to them of the Royal Warrant in 1902 when they became Royal Doulton.

Her forte was faience murals and vases with motifs of fairies and elegant ladies. Her initial output was that of unique vases with designs, somewhat similar to those of Arthur Rackham and Mabel Lucy Attwell. In her time she used her considerable talents to produce murals of ceramic tiles for many children’s wards in hospitals all over the world. Examples of her work are, or were, in the Royal Victoria Infirmary in Newcastle-upon-Tyne, St Thomas’s hospital in London, and many other hospitals. 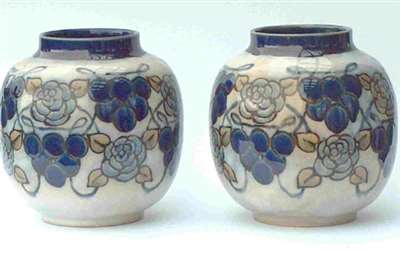 The production of faience work at Doulton’s Lambeth factory dwindled after the beginning of the 20th century. The colour changes that the pigments underwent during firing meant that only the most experienced artists could produce the quality that was needed, and by about 1910 production virtually ceased: the cost of production and the shortage of skilled artists were the main factors in its demise. After this Doultons, and consequently Margaret Thompson, concentrated production on their stoneware items.

The delightful pair of stoneware vases above contrast strongly with the earlier work of Margaret Thompson. Gone are the depictions of fairies and elegant ladies, albeit in stylized forms, and in have come the designs of the Art Nouveau period. No attempt is made to produce a visual reproduction of an item from nature, but stylised shapes of natural items are arranged in a pattern. The vases above date from about 1912, when Margaret Thompson was one of Doulton’s leading designers along with such illustrious names as William Rowe and Leslie Harradine. This design and other designs by Margaret Thompson (7941) and others were illustrated in a 1912 catalogue of “Doulton Ware ‘New Style’ Vases”. Margaret Thompson worked at Doulton’s Lambeth factory until about 1926.