Little is known of Georgie Smith, nor is her work very common. According to the ‘bible’ on Doulton, ‘The Doulton Lambeth Wares’, by Desmond Eyles and Louise Irvine, she was a Senior Assistant at Doulton in the late nineteenth and early 20th centuries.

The work shown would certainly indicate that she worked in the Art Deco period of the 1920s/30s. The image below is of a Doulton piece that displays the 'GS' signature mark of Georgie Smith. 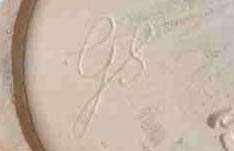