It was George Tinworth that set Doultons on the road to being producers of the finest decorative products. Until the arrival of George Tinworth, Doultons made only functional products, drain pipes, culinary containers such as jugs and bowls, and sanitary items. All these were made in salt-glazed stoneware. In 1866/7 George Tinworth started to work at Doulton’s Lambeth factory, having trained at the Lambeth school of Art. At the early age of 23 he had a figure group 'Peace and Wrath in Low Life', accepted for exhibition by the Royal Academy. He was also instrumental in the success of Doultons at international exhibitions in 1867, 1871, and 1873.

By this stage the management of Doultons had accepted the viability of the production of decorative products. The production of decorative wares thrived, helped by Tinworth’s ability to produce highly creative and varied designs in vast numbers. More ambitious items followed, such as pulpits, fountains, pavilions for exhibitions, and even complete facades for buildings. With his specialization in sculptured panels he was in the forefront of Doultons expansion. 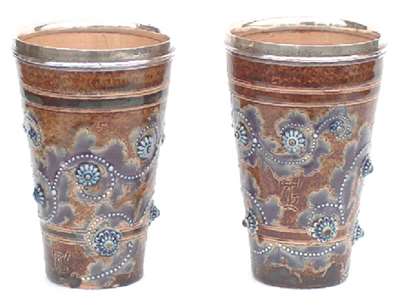 A pair of silver rimmed beakers by George Tinworth

George Tinworth signed his output on the outside, (see monogram) a priveledge that was never to be accorded to any other employees at Lambeth. Athough greatly appreciated at Doultons, he was unable to relate to his fellow workers. His upbringing had been dogmatically strict and he became a solitary figure working in his studio and finding it difficult to engage in general conversation.

Late in his life, the demand for sculptured panels declined and Tinworth concentrated on his figures and humorous sculptures. The aspect of Doultons production for the creation of which he had been responsible was now in the safe hands of the Barlow sisters and other very fine designers such as Eliza Simmance and Frank Butler. The making of fine vases was in the hands of other designers of genius and his days of rampant creativity were over.

Below is an image of a piece of Doulton by George Tinworth showing his 'GT' signature mark. 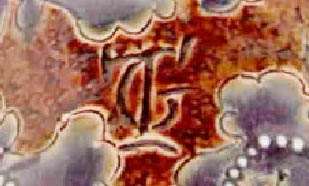