Leslie Harradine (1902-1915), started at Doultons in 1902 at the age of fifteen. He was a most gifted modeler, shaping numerous figurines, and he brought to Doultons (with Francis C Pope - q.v.) the concept that vases can have square corners. 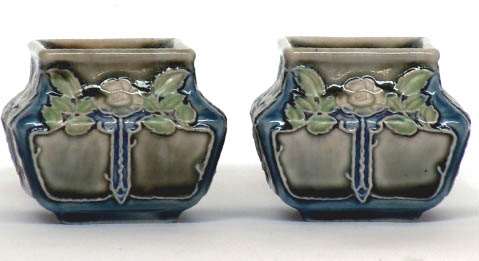 A pair of square squat 3” pots by Leslie Harradine

Some of his political and rustic figures were so popular that they continued to be made until the late 1920s. He did not stay long at Lambeth, leaving in 1908, but he continued to design for them, working freelance until 1915.

After the First World War he worked for Doulton Burslem for another thirty years. Of the examples we show, two are signed by Leslie Harradine, but the pair of blue hexagonal ones is not. Leslie Harradine's Doulton signature mark is an upper case 'LH'.