Mark Marshall was quite possibly the most original designer in the history of Doultons. He worked at Doultons from 1878 to 1912, and from the beginning of his career there, his imagination was unrestrained.

The diversity of his output was amazing. Even in his early years he would use the form of an animal as the base of a vase. The variety of colours and shapes when making vases knew no rivals, but apart from that he ventured into fantastic and grotesque shapes. 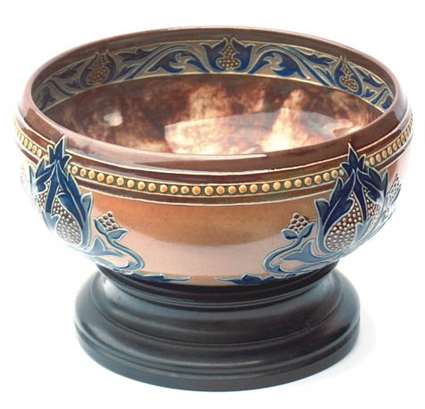 His importance in the story of Doulton’s progress into decorative ceramics is well illustrated in the ‘bible’ of Doulton stoneware, Desmond Eyles’ and Louise Irvine’s book, The Doulton Lambeth Wares. Pages of illustrations show his genius. The work we show is a relatively simple item. It is however notable that the creativity of Mark Marshall would not allow him to make a plain bowl; it had to have a marbled and banded interior.

Below is an image of Mark V. Marshall's 'MVM' signature mark for Doulton. 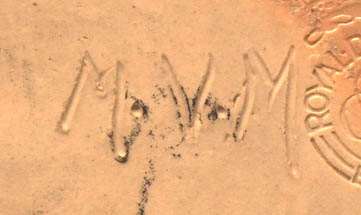