Until the late 1860s Doulton produced only functional items such as drains, salt-glazed bottles, culinary items, and sanitary ware. Then with the arrival of George Tinworth all changed, and following awards at international exhibitions in the late '60s and early '70s, decorative wares became part of the company’s normal output. 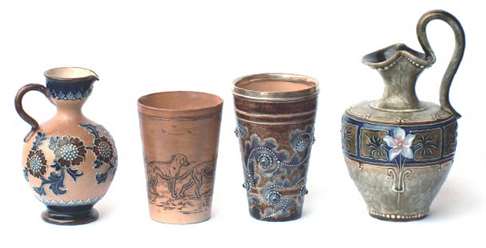 Shortly afterwards, in 1870, Arthur Barlow joined, and later, his 3 sisters, Hannah, Florence, and Lucy. This family were absolute masters of drawing wildlife on the soft clay, and the work of all four is collected with increasing avidity.

In the following years a ‘hoard’ of very able artists and designers joined the Lambeth factory. Top designers at the end of the 19th Century whose work still is relatively common, were people such as Eliza Simmance, Frank Butler, Edith Lupton, Mark Marshall, Margaret Thompson, William Rowe and Francis Pope. None of these were given the privilege accorded to George Tinworth of signing their work on the body of the items: all their signatures had to be concealed underneath. In the 19th century, works were usually signed by designer and ceramic artist, but the later works were usually signed only by the ceramic artists. 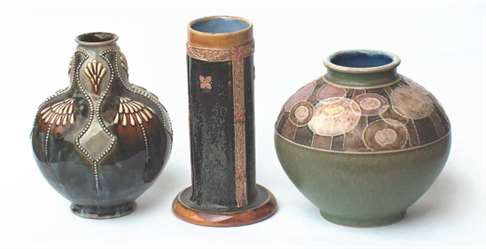 A vase by Georgie Smith, a vase by Minnie Webb, and a vase by Florrie Jones

Doultons must have been a wonderful place to work as many of the ceramic artists stayed for 40 to 50 years, or even more. Among those designers of the late 19th/early 20th centuries, staying for over 40 years were, George Tinworth, Hannah Barlow, Eliza Simmance, Arthur Pearce, John Broad, Walter Gandy, Francis Pope, William Rowe, and Bessie Newbery. 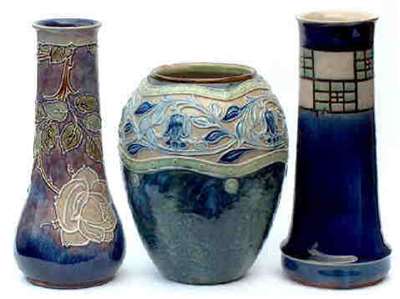 If you have Doulton items that need repairing or restoring then you use Royal Doulton ceramics restoration. The restorers have many year's experience in the restoraton of ceramics and pottery.