Hannah Barlow was one of the family that between them produced some of the finest decorative works ever produced by Doultons. Her brother Arthur joined Doulton shortly after the decorative side was established by George Tinworth in 1867. Arthur was followed by Hannah, probably the greatest of them all, Florence and Lucy. Hannah’s forte was sgraffito studies of animals in their natural surroundings. Not only was she a maestro at depicting the form of the animals, but her ability to capture them in motion on wet clay was unsurpassed. 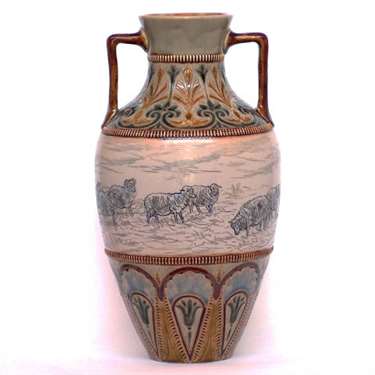 She joined Doulton in 1871 after doing freelance work for them previously. She stayed for 42 years till 1913. Her task was to decorate the animalia band around the vases, leaving the rest of the vase to other designers or assistants. Her output was phenomenal, producing up to 20 vases per day! 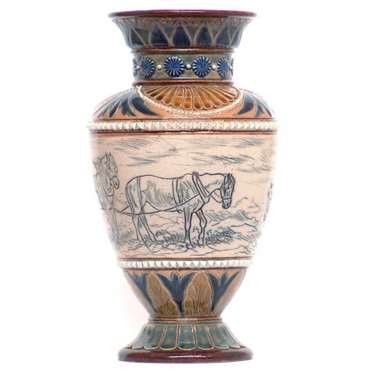 The vases we show are a large (14”) two handled vase with sheep, and a smaller (10”) vase with horses that is also signed by her younger sister, Lucy. Below is Hanna Barlow's 'HB' signature mark for Doultons.