Bessie Newbery is listed as being a Junior Assistant at Doulton’s Lambeth factory in 1882, and continued to work there for 42 years until 1924. Her talents were recognised and she worked with many of the finest designers, such as George Tinworth, Frank Butler and Eliza Simmance. She was soon promoted to Senior Assistant.

By 1911 she was a supervisor and in her last 10 years at Doultons, she produced original work. Her stoneware output was prolific and always of the highest quality. Quality works by her are still readily available. 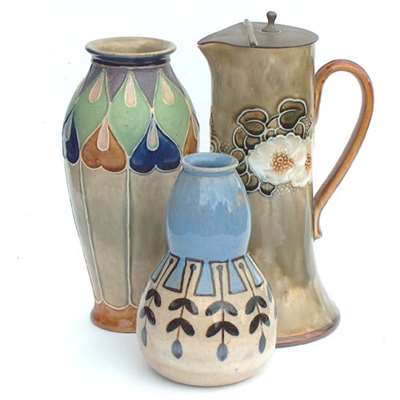 Three vases from the early 20th Century by Bessie Newbery

The three Bessie Newbery vases illustrated show the diversity of her 20th Century designs. On the left is a tube-lined vase from the beginning of the 20th century, with simple shapes and colours: this is a total contrast with the ‘High Gothic’ shapes and decoration that she produced when she was a junior assistant at the end of the 19th century.

The right-hand jug was made in collaboration with Florence Roberts, showing a typical item with natural (flora and fauna) designs, and the one in the foreground is a late work with a stylised gourd shape and geometric designs. The last vase can be dated to about 1922-4, as it has the back-stamp that was introduced in 1922, and Bessie Newbery left Doultons in 1924. When one considers that she was trained in the days of Frank Butler and the Barlow family, her ability to conceive designs in such contrast with her background is remarkable.

The photo below is of the base of a Doulton piece showing the 'BN' signature mark of Bessie Newbery.