Eliza Simmance, as a designer, was one of the cornerstones of the change at Doultons from the High Victorian Gothic designs to simpler flowing Art Nouveau and Art Deco designs. She started work at Doultons in 1873 and only finished in 1928 – a period of 55 years.

She worked with the illustrious Barlow Family, Arthur, Florence, Hannah and Lucy, but by 1880 she already had a staff of artists under her turning out her designs. Fortunately for us, and unlike many of her contemporary designers, she signed many of the pieces that were made by other artists to her designs: it is not uncommon to see her signature with that of three or four other artists under an item designed by her. 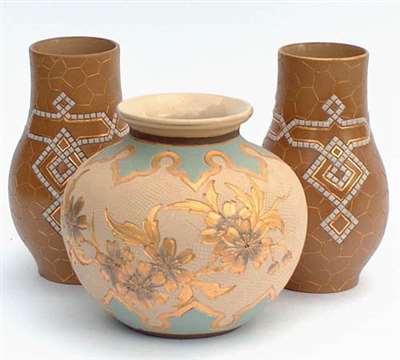 The vases shown are all ‘early’ examples of her work, and show more her ability of a craftsman as well as a designer. The unglazed vase in the foreground uses a great range of techniques, gilding, pâte-sur-pâte decoration, sgraffito work and chiné work. The two vases at the rear show a style that was closely associated with Eliza Simmance, using mosaic decoration with a background of ‘cracked ice’ decoration. In the beginning of the 20th Century, she produced a wide variety of flowing Art Nouveau designs, and by the start of the 1st World War was already producing the geometric designs so closely associated with the Art Deco period.

The peak of her career may be said to be this period after the turn of the century. She put behind her the dominance of the high Gothic designs of the 1880s and 1890s, and wholeheartedly embraced the simpler designs of the art Nouveau and then Art Deco periods. The period from 1905 onwards for her was a wonderful chance to innovate. Shapes, colours and designs were all in the melting pot and she delivered a variety in all these parameters that has probably never been rivalled in all the history of all the Doulton factories. Only a study of the variety of her output can do justice to her ability to innovate.